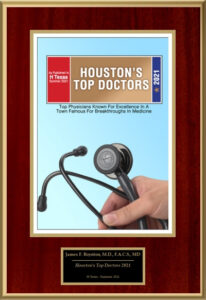 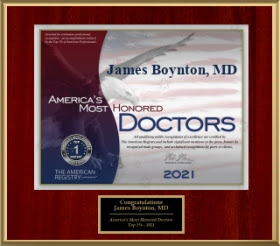 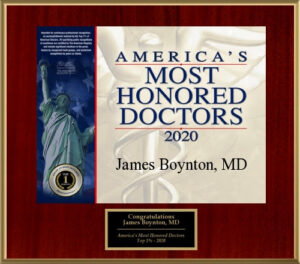 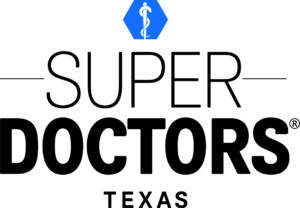 After being selected as a SuperDoctors® Texas Rising Star in 2012, Houston plastic surgeon James F. Boynton, MD was recognized for his exceptional surgical skill and expertise by being named to the 2013-2019 Texas Super Doctors® list—an honor earned by only 5% of doctors within their specific specialties and regions. This marks Dr. Boynton’s third consecutive year on the prestigious list comprised of peer-nominated physicians from all 50 states who have been autonomously critiqued on ethics, previous achievements, and a variety of other credentials.

To be named to the list, doctors need to first be nominated in their respective fields by their medical peers. Nominees will then be comprehensively evaluated by the Super Doctors® research staff on an independent basis. Focusing on “10 indicators of peer recognition and professional achievement,” this meticulous assessment covers everything from years in practice to professional activities to board certifications. Once evaluated, nominated physicians are then segmented by specialty and reviewed by a group of doctors who obtained the highest scores in the previous year’s evaluation process. Following this “blue ribbon panel” critique, points accumulated by each individual throughout all stages of the selection process are then tallied, and the Super Doctors® list is formulated based on the highest-scoring physicians.

In 2012, Texas Super Doctors®, an organization listing outstanding physicians in more than 30 medical specialties, named Dr. James F. Boynton as a Texas Super Doctors® Rising Star. The honor goes to only a handful of young physicians in Texas who have been fully licensed for no longer than 10 years and have proven significant achievements in their careers. The honorees are nominated by a group of their peers, with input from a panel of selected Texas Super Doctors, plus a review by researchers at Key Professional Media. Inc. Dr. Boynton’s recognition will be listed in a special advertising section in Texas Monthly in the July 2019 issue.

In order to be selected to this elite list, doctors are identified through a multi-step process that evaluates their degrees of peer recognition and professional achievement. A survey of doctors is then conducted to determine the nominees—doctors cannot nominate themselves. A thorough review of each candidate’s credentials, professional achievements, and peer recognition is also part of the selection process. Once the nominations are in, and research as well as the blue ribbon panel review have been conducted, points allotted for each of these criteria are totaled, resulting in the highest-scoring doctors being named to the Rising Stars list. 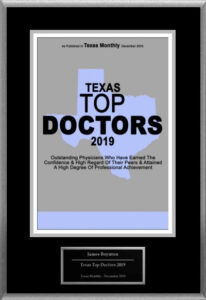 Dr. Boynton Chosen as One of “America’s Best Physicians” in 2020 by the National Consumer Advisory Board 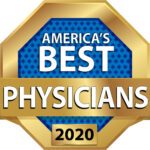 The National Consumer Advisory Board selected Dr. Boynton as one of “America’s Best Physicians” in 2020. The private research organization was founded to provide the public with information on the best physicians in the U.S. based on nominations from patients, fellow doctors, a colleague, or by the board’s own selection committee. The nominee must then complete an application attesting to his or her experience, training, and other aspects of their careers. The board then begins a verification process of the nominee’s credentials, and evaluates testimonials and reviews relating to patients’ experiences in the doctor’s care. Once these steps are finalized, the doctor can be officially selected for inclusion on the “America’s Best Physicians” list. The National Consumer Advisory Board does not accept fees, advertising, or sponsorship donations for doctors to appear on the list.

Dr. Boynton Has Been Selected As a “Top Doctor” in Plastic Surgery by U.S. News & World Report in 2012 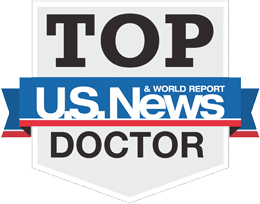 Every year, U.S. News and World Report releases a peer-nominated list of the country’s top doctors. This year, Dr. James F. Boynton has been recognized as one of them. Partnering with Castle Connolly Medical Ltd., publisher of America’s Top Doctors®, U.S. News’ goal in establishing the list was to single out credentialed doctors who specialize in a variety of fields and procedures and to assemble a knowledge base in which doctors from around the country can look to when referring patients to physicians in other fields. To be selected as a Top Doctor, candidates’ credentials and qualifications are evaluated by licensed doctors. Previously, nominations were obtained only from specific geographical locations; however, the nomination process is now conducted online and is available nationwide.

U.S. News’ “Top Doctor” list has built a strong foundation of data culled from Castle Connolly’s Top Doctors™ list. The physician-led research team carefully reviews qualifications for doctors being considered. By publishing the list of top doctors, patients can easily access a number of reliable and experienced doctors in a wide range of medical fields. Not only is the list beneficial for patients, but also for doctors looking to refer their patients to a licensed doctor in another medical field.

Doctors cannot nominate themselves, there is no application process, and they cannot pay to be selected. Participating doctors can submit up to 10 names for nomination in his or her own specialty, and up to 3 per specialty in other fields.

Dr. Boynton was selected as “Regional Top Doctor” in 2011

Every year, Castle Connolly issues direct mail and online surveys to thousands of physicians and other healthcare professionals asking them to identify doctors in each specialty throughout their region who exemplify excellence. Furthermore, the Castle Connolly physician-led research team conducts several phone calls with leading specialists, chairs of clinical departments, and vice presidents of medical affairs in an effort to identify top specialists for a comprehensive array of diseases and procedures. 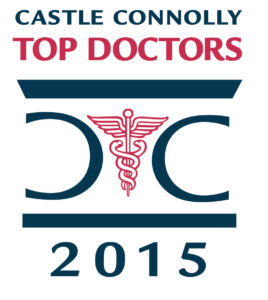 The peer nominated doctors then undergo a rigorous screening—also conducted by the Castle Connolly research team—which includes a review of credentials such as medical educations, training, hospital affiliations, disciplinary histories, and more. Following the final screening, those doctors who are considered among the elite in their respective specialties and communities are selected for inclusion on the “Top Doctors” list. No medical professional can pay to be included in any Castle Connolly Guides®, magazine articles, or online directory.

Castle Connolly conducts this “Top Doctor” selection process with the utmost integrity and thoroughness, ultimately ensuring patients all over the United States have the information necessary to receive the most effective and ethical healthcare available. 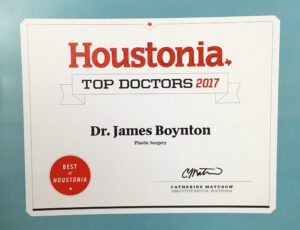 Houstonia, a community magazine distributing to a total of 10 counties in and around the Houston area, has named Dr. Boynton to its list of “Top Doctors” for 2013, 2015 & 2017. In order to compose this list, Houstonia surveyed over 15,000 physicians and nurse practitioners in the local community with one simple question: “If you or someone you loved needed medical care, whom would you choose?” Dr. Boynton, who was recognized for his high quality of patient care and ability to achieve excellent cosmetic surgery results, was one of only 11 plastic surgeons in the Greater Houston area in his speciality to be named to Houstonia’s elite list.

Dr. Boynton was selected by the Consumers’ Research Council of America as one of “America’s Top Plastic Surgeons” in 2011. Consumers’ Research Council of America is an independent research company based in Washington, DC that evaluates professional services with the purpose of educating and assisting consumers in obtaining the finest professional services.

Plastic Surgeons are selected by a point value system that values experience (years in practice), training (education and continuing education), professional associations and medical societies, and Board Certification. Consumers’ Research Council of America prefers this point method over the survey method. 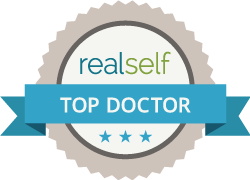 Dr. Boynton is proud to have been selected as a “Top Doctor” by RealSelf from 2010-2016. Dr. Boynton was one of the first doctors in the Houston community to start answering questions on RealSelf, and he has demonstrated an ongoing commitment to answering consumer questions and encouraging patients to share their unbiased reviews and ratings. 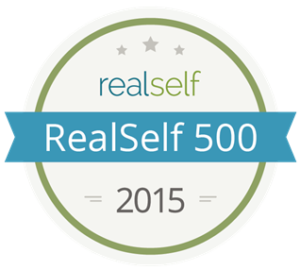 Dr. Boynton was also named to RealSelf’s 500 Top Doctors in 2015. In recognition of his high patient ratings and favorable feedback on his contributed expertise. This Top Doctor badge is awarded to less than 10% of the RealSelf Doctor community across the globe.

Dr. Boynton Was Selected As a “Leading Physician of the World” and “Top Plastic Surgeon in Texas” by The International Association of Plastic Surgeons 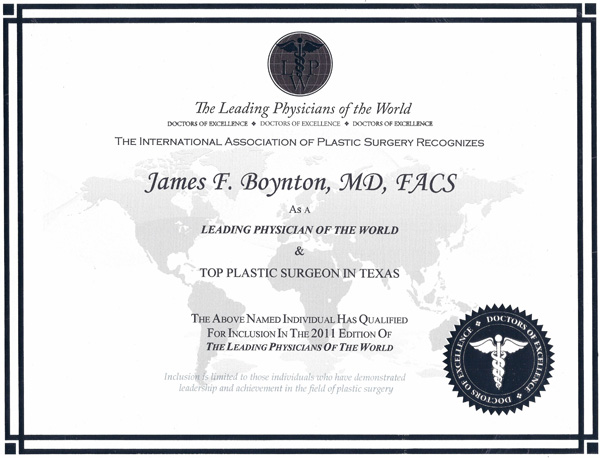 IAPS’s reputation for excellence derives from the most exacting levels of quality they demand from their members, each of which must pass a scrupulous evaluation process of their education, training, medical techniques, and consumer ratings. This set of standards is very stringent and is what maintains the high level of integrity in the organization. Among being a high honor in the community, the International Association of Plastic Surgeons is also a resource for patients looking for a doctor in their area.

The IAHCP Marketing and Research Department nominates top physicians based on data collected from a variety of different resources, such as education, medical affiliations, consumer reviews, and more. In addition to individual selection, active members have the ability to nominate peers, colleagues, mentors, and associates.

Voted One of Houston’s Top Doctors by H-Texas Magazine 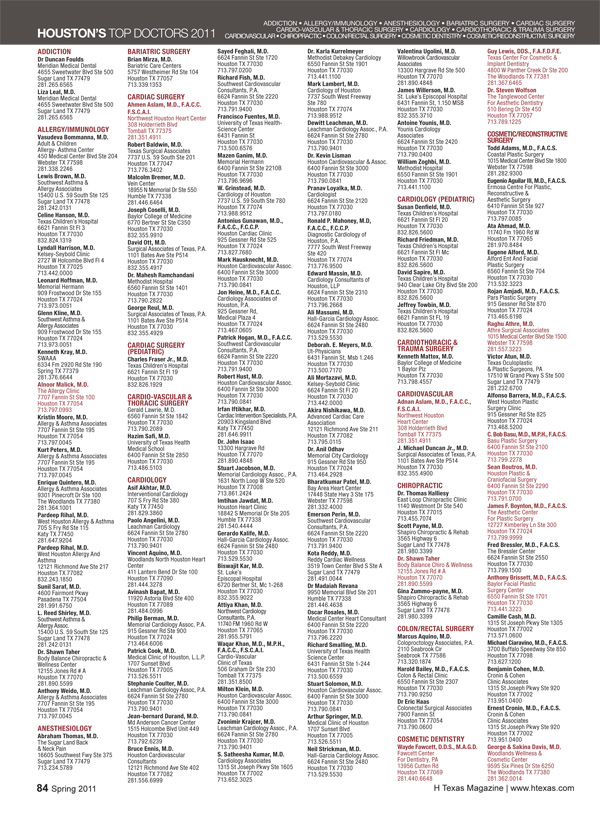 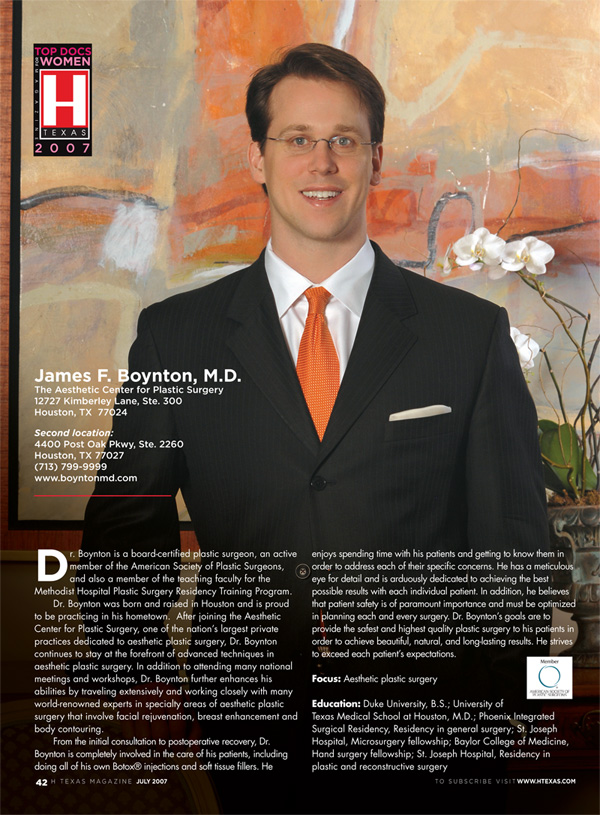 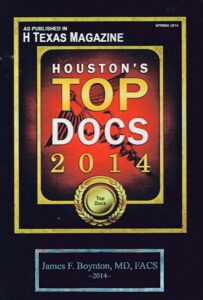 Dr. Boynton was proud to be recognized in Health and Fitness Magazine as one of Houston’s Top physicians for Cosmetic/Reconstructive Surgery. The Doctors’ Choice Award was given to 273 of Houston’s top physicians based on votes from their peers. Health and Fitness Magazine mailed letters to more than 2,800 Houston-area physicians, encouraging them to cast a ballot for the top doctors in Houston. The confidential online survey asked doctors to name two physicians that they would send their family or friends to. Learn more at www.HealthAnd FitnessMag.com

Volunteer for the DTAG Program; Dr. Boynton Has Received This Award Annually from the City of Houston Since 2005 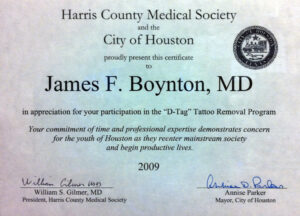 Dr. Boynton Is an Eagle Scout