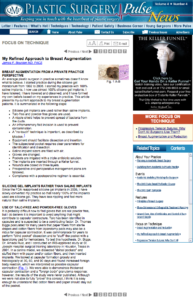 Dr. Boynton wrote a chapter on breast augmentation that has been published in the online publication Plastic Surgery Pulse News. 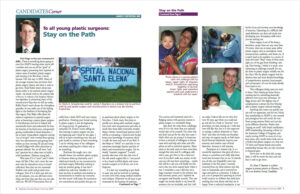 “To all young plastic surgeons: Stay on the Path.”

“Rhytidectomy and Parotidectomy Combined in the Same Patient.”

Boynton JF, Cohen BE, Barrera A.

Until now, aesthetic goals in parotid surgery have seldom been addressed because oncologic concerns have largely overshadowed aesthetic issues for patients with parotid masses. Fortunately, the majority of parotid masses are benign pleomorphic adenomas that rarely recur, leaving a large group of patients healthy after their parotid surgery, with some desiring aesthetic improvement in their facial appearance. Traditional parotidectomy incisions leave a visible scar on the neck as well as a visible hollow in the retromandibular region, which can extend onto the cheek. A rhytidectomy approach to the parotid gland allows for a more concealed, aesthetically appealing scar while maintaining good visibility and access to the parotid gland. By performing bilateral sub-SMAS (superficial musculoaponeurotic system) rhytidectomy after a parotidectomy, facial symmetry and balance is enhanced, and these aesthetic deformities can be minimized. The SMAS flap can help to fill the hollow and form a tissue barrier over the resected gland to prevent gustatory sweating. Finally, the incision scarring is minimized with a rhytidectomy-type approach. Two cases are reported in which patients underwent both rhytidectomy and parotidectomy. In the one case, the procedures were performed in the same surgical setting. In the other case, they were performed in a delayed fashion. These cases exemplify the possibility of addressing facial aesthetic goals of rejuvenation in a patient requiring parotid resection.

“The Effect of Forearm Bracing on Radioulnar Impingement.”