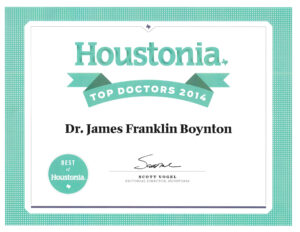 A year after being voted onto Houstonia’s 2013 “Top Doctor” list, we are pleased to announce that Dr. James F. Boynton has again been named to the community magazine’s elite list as a “Top Doctor” for 2014. To compose this list, Houstonia – who distributes to 10 counties in and around Houston – issued a survey to over 15,000 physicians and nurse practitioners located in the greater Houston area, asking them a single question: “If you or someone you loved needed medical care, whom would you choose?”

As one of the few plastic surgeons to be distinguished on the Houstonia list, Dr. Boynton says he is both proud and grateful to have received this recognition from his medical peers for the second year in a row. He adds that he will continue striving to provide the highest standards of excellence at Boynton Plastic Surgery, and he hopes those considering cosmetic or reconstructive plastic surgery will view this recent honor as another testament to his devotion to exceptional patient care.